Discover the multifaceted cultural heritage of Morocco through its 4 imperial cities, successively designated as the capital, at different times by different monarchs from Moroccan dynasties: Idrissids, Almoravids, Almohades, Merinids, Saadians and Alawites.

Through this circuit you will also discover the cities of Tangier and Tetouan, unmissable historical sites, the incredible diversity of landscapes of Morocco (green valleys and canyons, Atlantic and Mediterranean facades, immense beaches, …) as well as the hospitality of its inhabitants.

Afterward, a guided sightseeing tour of Casablanca includes a visit to the port the old medina; Place Mohammed V, a busy shopping street lined by residential blocks dating from the 1930's;United Nation Square, designed by French architect Joseph Marrast; the League of Arab States Park, which was built in 1925 and offers a large area of greenery with palm trees, arcades, pergolas, and cafés with shady terraces; and the impressive and newly built Hassan II Mosque, the second largest mosque in the world.
OPTIONS : Lunches and activities (cf. extras).
An hour and a half guided inside tour of the Mosque allows guests to see the inside of one of the very few mosques in Morocco open to non-Muslims. Overnight at a selected hotel.
OPTIONS : Dinners and activities (cf. extras).

Breakfast.
A morning drive to Rabat, for a guided tour of Rabat, including the old medina; the picturesque kasbah of the Oudaya, museum and the Oudaya Gate, built during the Almohad dynasty; the well-preserved Hassan Tower and the Chellah which were built by the Merinids in the 12th and 13th centuries; the Mohamed V Mausoleum, the burial place of the present King's father; the synagogue; the front of the Royal Palace; and the government district.
OPTIONS : Lunches and activities (cf. extras).
Free afternoon to explore the downtown shopping area or see the impressive Archaeological Museum with its collection of artifacts found in Volubilis.
OPTIONS : Dinners and activities (cf. extras).
Overnight at a selected Hotel in Rabat.

Breakfast.
Morning drive to Tangier via the Grottes of Hercules and Cape Spartel The natural limestone caves known as the Grottes of Hercules were named after a story in classical mythology which tells of Hercules resting in these grottes. Notice how the cave's opening to sea resembles an inverted map of the African continent. Prehistoric remains were discovered here and circular engravings can be seen on the cave walls today. Cape Spartel, known as the Cape of Vines to the third-century Romans who occupied this land, is located on the north-western most tip of Africa. The Cape's lighthouse overlooks the strait where the Atlantic Ocean meets the Mediterranean Sea. Continue on to Tangier. Tangier, the gateway to Europe and Africa is a very ancient city, which has served as a key strategic port for many civilisations.
OPTIONS : Lunches and activities (cf. extras).
Occupied over time by the Greeks, Romans, Spanish, Arabs, Berbers, and Portuguese, Tangier today shows visitors a fascinating blend of cultures and traditions. Overnight at a selected Tangier hotel.
OPTIONS : Dinners and activities (cf. extras).

Breakfast.
Morning sightseeing tour of Tangier. During your visit to this bustling city, take in the sight of small tea houses, lovely old buildings and ornate mosques ; the fragrant smell of the mint tea and spice markets; and the sound of the call to prayer. Your sightseeing tour of Tangier will reveal the splendours of this city, including the former sultan's palace called Dar El Makhzen which is now a wonderful museum of 17th and 18th century Moroccan arts, the ancient kasbah, the alleyways of the old medina and the souks, where a colourful scene of locals haggling over exotic wares awaits you.
OPTIONS : Lunches and activities (cf. extras). Afternoon visit to the former American Legation where guests can see chronicled the relationship between the United States and Morocco from as early as 1776 when Morocco became the first country to recognise the independence of the United States.
OPTIONS : Dinners and activities (cf. extras).Overnight at a selected Tangier hotel

Breakfast.
Morning drive to Tetouan, a town established in 1307, which is known today for its Hispano-Mauresque architecture and culture, for a brief visit. Continue on to Meknes, a city founded in the 9th century by Zenata Berbers. A sightseeing tour of this former Imperial City of Morocco includes the old ramparts; the Agoudal Basin which was used to water the royal gardens and amuse the favorite concubines; the Moulay Ismail royal stables, granaries, and House of Water (Dar el Ma) which were built in the 17th and 18th centuries to house, feed and water the sultan's twelve thousand horses; Bab el Mansour, one of the most beautiful gates in Morocco; the Moulay Ismail Mausoleum, one of the very few holy sites in Morocco which may be visited by non-Muslims; and the medina with its souks of silks, shoes, woodworks, iron works, and baskets.
OPTIONS : Lunches and activities (cf. extras).
Drive to nearby Volubilis for an afternoon visit to see impressive and well-preserved Roman ruins, including approximately 30 mosaic floors dating from 25 BC.
OPTIONS : Dinners and activities (cf. extras).Overnight at a selected Hotel in Fes.

Breakfast.
Full day guided sightseeing tour of Fes, highlighting the old and news medinas. The tour of this religious capital of Morocco includes visit to the 14th century religious schools (medrasa) of Bou Inania and Attarine.We also include photo stops at the imposing gate of Bab Boujloud, the splendid fountain at Place Nejjarine, the ancient ramparts, and the beautiful front entrance of the Royal Palace. UNESCO declared this impressive labyrinth to be one of the world’s cultural treasures.
Overnight at a selected hotel in Fes.
OPTIONS : Meals and activities (cf. extras).

Breakfast.
A full day drive to Marrakech Via Beni-Mallal this county town of province is an agricultural market and a shopping mall in full expansion, surrounded by olive grove remarkably well irrigated. one can make a stop to Ain Asserdoun to 3.5 km to the southeast. The road increases until the Kasbah de Ras el Ain (1 KM) dominates the city and the plain of the TADLA It is from a hundred meters that one has the most beautiful view of the Kasbah. Continue to Marrakech overnight at a selected hotel.
OPTIONS : Lunches and activities (cf. extras).

Breakfast
A morning, guided, cultural sightseeing tour begins with Menara Gardens, where we see the small Saadian pavilion mirrored in still water in the Atlas Mountains and olive groves in the background. This pavilion was used by sultans for romantic interludes.. Next, we enter the old medina, buried within the imperial walls, where we stop at the foot of the Koutoubia Minaret, one of the masterpiece works of Islamic architecture. We continue to the Kasbah (fortress) where a stroll through it leads us to the 16th-century monument site of the Saadian Tombs Notice the wonderful Hispano-Mauresque architecture surrounding the burial ground of the royal family. Afterward, a visit of the aristocratic Bahia Palace shows us a lush Moorish style garden in the courtyard of a large palace with beautifully painted residential rooms. Finally, a stroll through the famous Jemaa El Fna Square, the ancient meeting point of the tradesmen in Northwest Africa, ends the tour.
Overnight at a selected Hotel in Marrakech.
OPTIONS : Meals and activities (cf. extras). 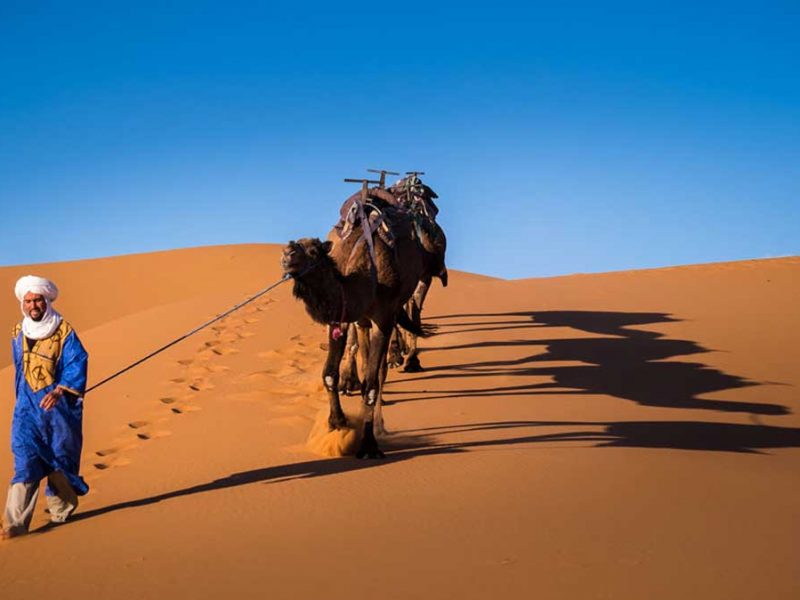 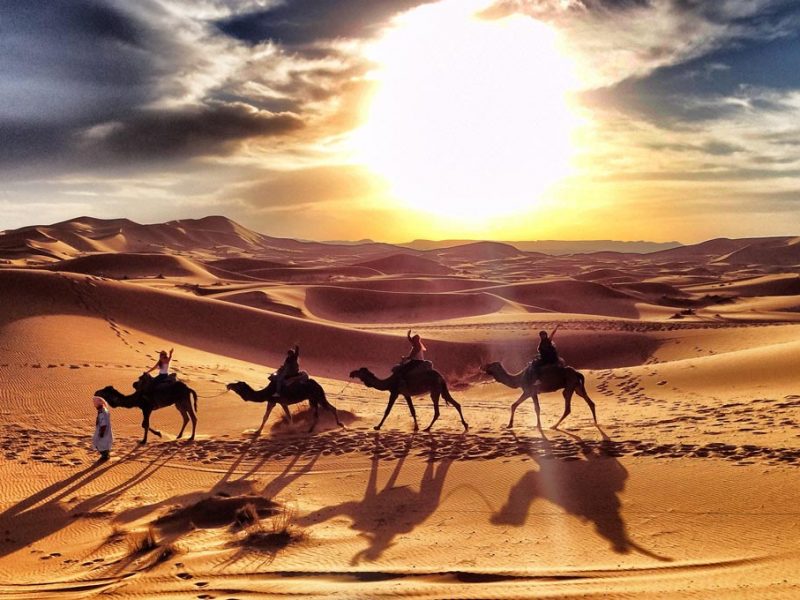 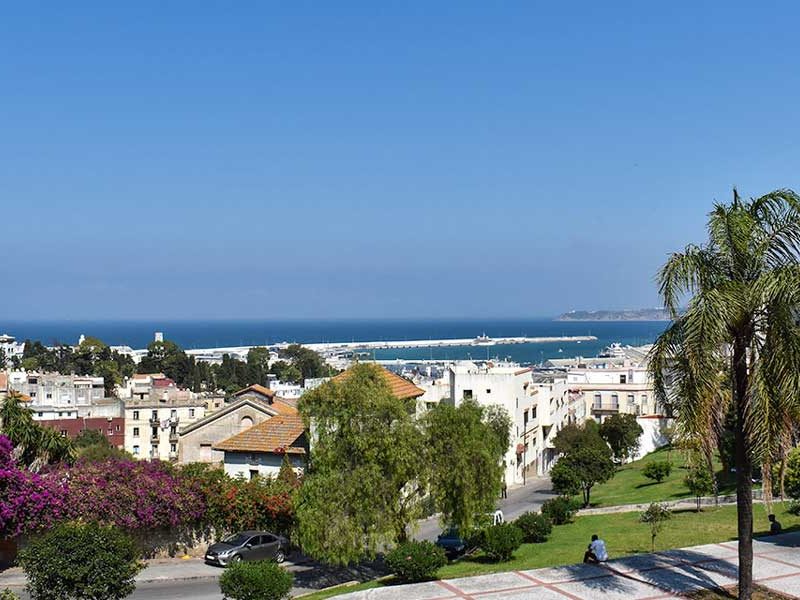 Tanger to Marrakech via the desert 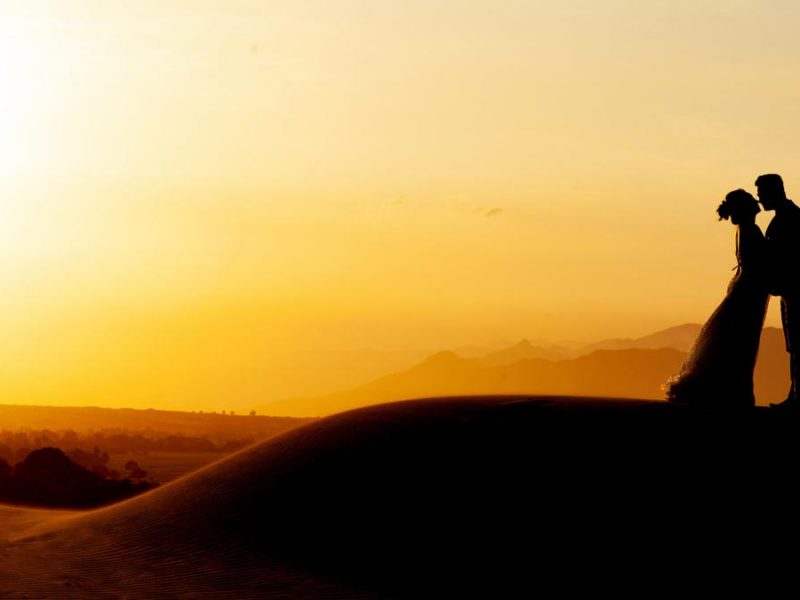